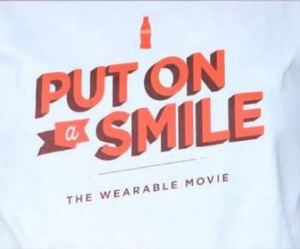 Brilliant marketing idea by Coca Cola….just genius. Coca Cola mailed what looks like 600 custom screen printed t-shirts all around the world with a Thank You note attached…and some simple directions. Put on the tshirt (and a smile), and snap a picture. Email it back.

Once all of the pictures were returned, the Coca Cola marketing department pieced all the emailed photos together and made The Wearable Movie. Why is this so utterly brilliant, you might ask. Each t-shirt was so custom screen printed, that it has ONE MOVIE FRAME on each shirt. In the short, less than two minute video, you get a glimpse of all the t-shirts hanging in the screen printing warehouse, all in a row.

At the beginning of the video, you see a sampling of who received these custom tshirts, and where “in the world” there were, along with one young lady centering the image on her computer and snapping the picture. When pieced together, the movie is the tale of “two friends” trying

to get a set of lips to smile. Remember the old “Have a Coke and a Smile” campaign? If you are of a “certain seasoned age” you do? More memorable marketing by Coca Cola.

Did you know that it’s rumored that Coca Cola was the FIRST company to market their brand on a t-shirt? After reading some history on the Coca Cola company this morning, it’s really an amazing company. Did you know that the first “other soda flavor” that Coca Cola released was FANTA Orange? I would have guessed TAB as the first. Also at one time (pre-WW1), Coca Cola syrup was sold as medicine to “get rid of headaches and fatigue.” Hmmmm….. 🙂 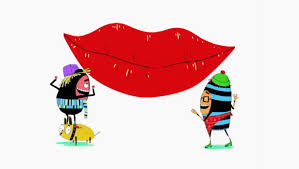 Watch the movie. It’s cute. Kids will like it especially if they understand what went into it. It’s yet AGAIN, a great way to market a company….via things people will wear. Can’t you just hear the people that got shirts telling anyone that they see that they were in a movie? As I say all the time, custom screen printed t-shirts can be walking billboards and lend lots of marketing possibilities, and many many different venues. You know…people wear t-shirts ALL THE TIME! Excited yet?

This entry was posted in Fun T-Shirt Stories, T-Shirts as Marketing Tools. Bookmark the permalink.